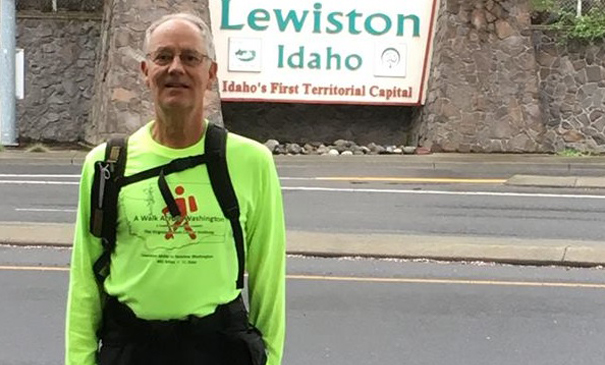 When Don Muggli received a total-knee replacement at Virginia Mason 10 years ago, he never thought he’d be walking across Washington state in 31 days. But when his younger brother, Dale Muggli, died of colon cancer, he wanted to take on a life-changing challenge that would honor his brother, increase awareness of colon cancer, and raise funds for the Virginia Mason Cancer Institute to help other people with this widespread disease.

On April 13, at 68 years old, Don started at Lewiston, Idaho, crossed the border into Clarkston, Wash. and walked for 441 miles, 31 days in a row, until he reached Seaview, Wash. and stepped into the Pacific Ocean.

Don’s fundraising walk will donate 100 percent of the funds to the Virginia Mason Cancer Institute. “I’m amazed at the generosity of people who want to support this walk and help other people with cancer,” says Don. “I couldn’t help my brother, but we can help others through their struggle with cancer. We can also raise awareness of colorectal cancer and encourage people to get recommended cancer screening. He inspired me to take this life affirming step.”

Don’s brother Dale was living in Cle Elem when he received his cancer diagnosis in Ellensburg. He was referred to the Virginia Mason Cancer Institute where he had surgery and chemotherapy. He passed away in August of 2015.

“I want to raise awareness of this devastating disease,” says Don. “The American Cancer Society reports that colorectal cancer is the third most common cancer among men and women and the second leading cause of cancer deaths in the U.S. I know Virginia Mason will use these funds wisely to help with cancer care and research to fight this disease.”