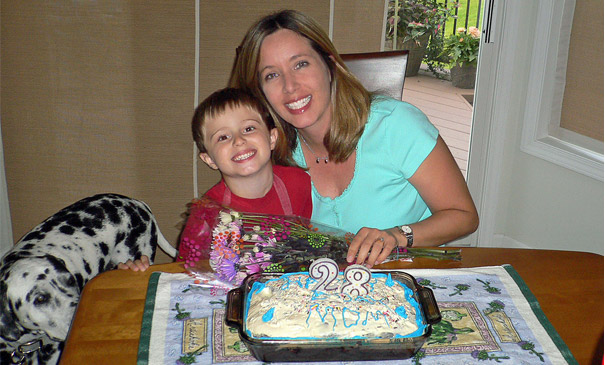 Fighting Back Against Immune System Diseases

It's easy to understand why the Schafer family supports the groundbreaking science at Benaroya Research Institute at Virginia Mason (BRI): For them, the fight against autoimmune diseases and allergies is personal.

When Amy Schafer became severely ill a few months after giving birth to her son, Luke, in 2002, her doctors discovered that she had Hashimoto's thyroiditis. This condition, where the immune system starts attacking healthy cells in the thyroid, caused Amy to endure fatigue, insomnia and even tumors in her neck.

She was finally feeling better about a year later — and then 15-month-old Luke tried a supermarket food sample and had an anaphylactic episode. His skin started to swell and he broke out in hives. Amy later learned that Luke was reacting to peanuts and had multiple severe food allergies.

And that's not the only way that immune disorders and allergies affect Amy's family.

“My mom has Addison's disease, which her doctors say may have an autoimmune component,” says Amy, a technology consultant who lives with her family in Michigan. “And our beloved dalmatian, Pepper, was diagnosed with type 1 diabetes shortly after we learned about Luke's food allergies.”

That's why Amy jumped at the chance to make a donation to support Eric Wambre, PhD, in his peanut allergy research at BRI, after she read about his work on the Food Allergy Network. This research includes discovering a cell that plays a big role in peanut allergies and finding ways to make medication more tailored to individual patients. Her family has since made additional generous donations to BRI in hopes of furthering research that combats the conditions that they've dealt with.

“I've been watching research for 15 years now and haven't seen much that could help us until I learned about Dr. Wambre's work,” Amy says. “It's thrilling to see the discoveries they're making at BRI, like identifying cells that are responsible for allergies and learning how to better understand what treatments will work for which patients.”

Today, Amy's family manages autoimmune disease and allergies in part by living healthy, active lifestyles. Thankfully, Amy's Hashimoto's has been in remission for the past several years. Luke, now 16 years old, vigilantly monitors what he eats and hasn't let severe allergies stop him from being a varsity swimmer, runner and active member of his high school robotics club. Amy's mom, Annette, is also doing well, and Pepper lived until 14 (98 in dog years) thanks to Amy's help managing her diet and giving her twice-daily insulin injections.

The prevalence of immune system disease in their family helps explain why BRI’s mission resonates so strongly with the Schafers: They understand that these diseases are connected, and that progress against one disease means progress against them all.

“We'll do everything we can to support BRI,” Amy says, “because their breakthroughs can create a domino effect against all of these diseases.”