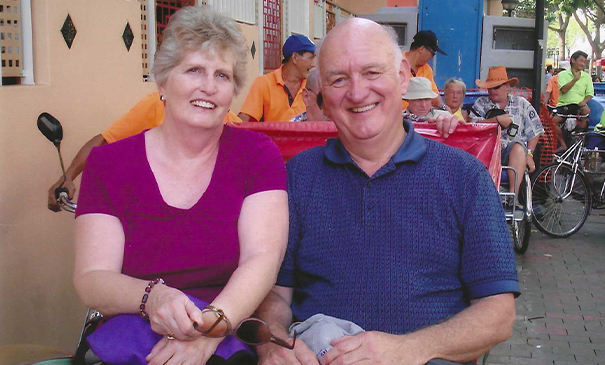 Traveling the World Thanks to Virginia Mason’s Care

Pat Revell has snorkeled in Costa Rica, cruised around the Black Sea and ridden camels in Morocco — trips she didn't know would be possible when she was diagnosed with a rare and serious cancer.

Pat started feeling stomach pains shortly after she and her husband, Ed, returned from a trip to the Galapagos Islands. She ultimately received a life-changing diagnosis: gallbladder cancer.

“I was a nurse for years and I didn’t even know you could get gallbladder cancer,” Pat says. “The doctors told us not to read about it online, but of course we did and found that there is a very low survival rate.”

They first looked for an oncologist near their home in Washington’s Tri-Cities area, then expanded their search.

“I’m originally from Ketchikan, Alaska and growing up, I remember if there was anything your local hospital couldn’t handle, you went to Virginia Mason,” Pat says. “So, I called them and talked to a social worker. She said ‘you need to see Dr. Picozzi, he’s the best.’”

Pat was hesitant to receive treatment far from home, but that changed as soon as she came to Virginia Mason.

“The first day we were there, we got in the elevator with a custodian and she was so nice and friendly and made sure we knew where to go,” Pat says. “From that moment on, we knew Virginia Mason was the right place.”

Each staff member they met was equally kind and supportive. Dr. Picozzi and his team showed deep expertise and compassion — especially when delivering the news that Pat’s tumor could not be removed surgically.

“Dr. Picozzi said ‘we can still help you’ and recommended a clinical trial,” Pat says. “He just wasn’t willing to give up. So I put my faith in him.”

They changed Pat’s treatment schedule by one week so she and her husband could take a trip to Tahiti that they’d planned months before. Then, Pat and Ed settled into a new travel routine: Regular four to five-hour drives between the Tri-Cities and Seattle, stopping at Dairy Queen halfway in between.

“I lost 30 pounds with cancer, and gained it back with Dairy Queen,” Pat laughs. “Gallbladder cancer was a shock to the system and deciding to receive treatment 200 miles from home wasn’t easy. But we knew Virginia Mason was the right place. And finding Dr. Picozzi was pure luck.”

The Revells recently made a generous donation to honor the amazing care Pat received. Today, Pat is doing well and looks forward to getting back to traveling the world after the pandemic.

“It’s been ten years now and I’ve been able to take my grandchildren to Spain and Northern Italy,” Pat says. “I climbed Machu Picchu (very slowly), which was something I always wanted to do. I’ve been able to do so many things thanks to Virginia Mason.”