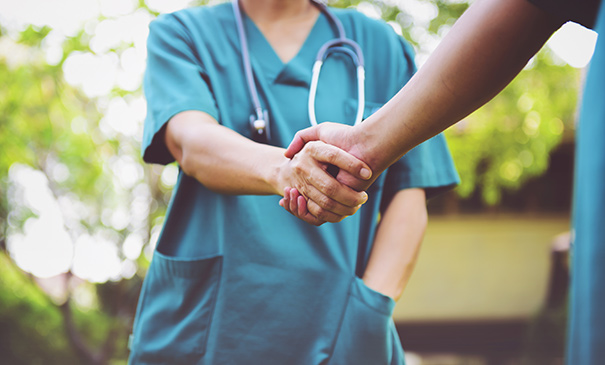 Steve Peterson included a note that read “Thanks for my health back” with his recent donation to Virginia Mason — marking the triumphant end to an ordeal that started 10 years ago.

In 2008, Steve was diagnosed with diverticulitis after a routine colonoscopy at another hospital. His condition was mild at first – just cramps and abnormal bowel movements that he could stop by briefly switching to a liquid diet. But things got complicated after another colonoscopy caused a four-inch tear in his colon.

Then Steve had a severe diverticulitis attack that caused him to lose 75 pounds. When his doctor recommended bowel resection surgery, Steve was reluctant given his bad colonoscopy experience. So he instead tried an antibiotic that was so potent it made his Achilles tendon rupture while he was climbing the stairs – causing him to fall and break his leg.

“I felt hopeless because my health was getting worse, not better, with everything I tried,” Steve says. “Then a friend recommended trying a specialist at Virginia Mason.”

When he saw Elisa Boden, MD, she told him he needed bowel resection surgery with colostomy – ASAP. The operation was successful, and Ravi Moonka, MD, put Steve on notice that he needed to gain 35 pounds before the colostomy could be reversed.

“My friends joke that there was an ice cream shortage in Issaquah for about six weeks,” Steve says, “but because I’d received such clear instructions, I knew my goal and I was committed!”

After the reversal surgery, Steve’s recovery was quick and easy. Within a month, he was eating a normal diet and hitting the gym – a success he credits to our team medicine approach.

“Everyone from the schedulers to the nurses to the surgeons had a deep knowledge of my case and performed their roles with compassion and without mistakes,” he says. “They didn’t look at me as ‘just another patient’ – they were clearly working together to make sure I got the best possible care.”

Now Steve’s a Virginia Mason believer – and a committed donor who wants to help us provide life-changing care to patients like him.

“If I ever need another surgery, it’ll be at Virginia Mason,” he says.