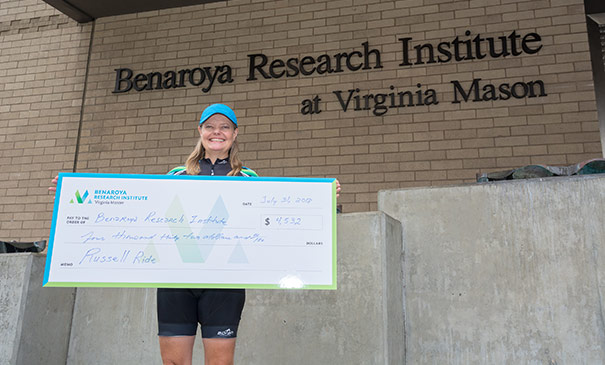 Biking 800 Miles to Get Closer to a Cure

Some people go the extra mile for their favorite cause. Roberta Winter, a health policy analyst from Bremerton, went 800 miles past that: She recently biked from her home to Sonoma Valley, Calif., in the inaugural “Russell Ride,” which she created to honor her brother Russell’s fight with Type 1 diabetes (T1D).

“My brother was only 42 when he died from T1D complications in 2007,” she says. “Many people don’t know that this disease is taking lives or that treatment is a huge financial burden, and I wanted to change that.”

Roberta had two goals for her ride: raise awareness and raise funds for the Benaroya Research Institute at Virginia Mason (BRI). She started in her community, talking to other Seattle-bound ferry commuters about T1D, leading conversations on social media and hosting fundraising events at Bremerton breweries. Then, from the misty Olympic Mountains to the windswept roads of Northern California, she talked to everyone she met about supporting T1D research and making therapies more accessible.

“People are dying because they can’t afford insulin,” she says. “And not just older people, people in their twenties.”

She knows the health care system has a long way to go, but the support she received during her ride motivated her to keep fighting for improvements. For example, she hit a rough patch of road and fell off her bike in Astoria, Ore. — and the man who stopped to help her just happened to have T1D.

“He told me about the hardships he’s faced,” she says. “For the rest of the ride, I thought about him, I thought about my brother, and every person I met inspired me to push a little harder.”

Roberta, age 61, rolled into Sonoma Valley after just eight days — a journey that takes most cyclists around two weeks. Her final fundraising total was $5,000, which she knows is already making a difference. She devoted the funds to a crowdfunding campaign that’s helping BRI’s Marika Bogdani, MD, PhD, raise money for research that could unlock T1D’s mysteries — and open a new door to preventing the disease.

“Many people who supported me had never donated to BRI before and that was huge, because research is so underfunded,” she says. “I hope to keep this momentum going and have more people join me for Russell Ride 2019 — it's scenic, it’s a great cause and it's always a good day when all you have to do is get on your bike and ride.”