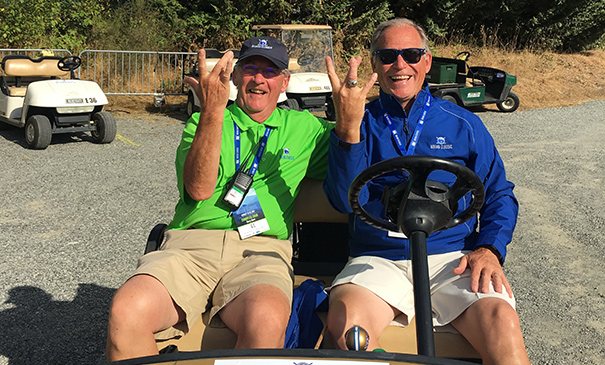 Envisioning a Day without Autoimmune Disease

When Gary Kerr’s wife was diagnosed with multiple sclerosis (MS) in 2015, it gave new meaning to his role as co-chair of the volunteers for the Boeing Classic golf tournament. The annual tourney has raised millions of dollars for charities and nonprofits. Its main beneficiary is the Benaroya Research Institute at Virginia Mason (BRI), which is on a mission to improve treatment for autoimmune diseases like MS.

Every year, Gary and the event’s other volunteer co-chair, Tom Bonorden, each spend about 400 hours recruiting and organizing the volunteers who make the tournament a success.

“There are more than 850 volunteers who do everything from staffing the practice facility to keeping score on the golf course,” Tom says. “It’s a lot of work for us, but it’s worth it because using volunteers keeps the tournament’s costs down, which means more money goes to BRI.”

Like Gary, Tom’s commitment to the tournament reflects his personal experience: he watched his father and mother struggle with diabetes. Imagining a world without this disease helps him brush off the Boeing Classic’s invariable stresses. One year, a former U.S. Open champion got irritated when Tom recorded the distance of a shot that went off the course.

“His bad day was going to continue,” Tom remembers. “But mine was over as soon as he drove his cart away!”

There are joyful moments too – like when Tom and Gary watched a 10-year-old boy birdie the 13th hole to win balls autographed by famed golfer Nick Price.

“His face just lit up – and so did ours,” Gary says, “Those moments are especially poignant because they’re connected to this larger cause, of helping BRI move closer to a day when people won’t have to deal with destructive diseases.”