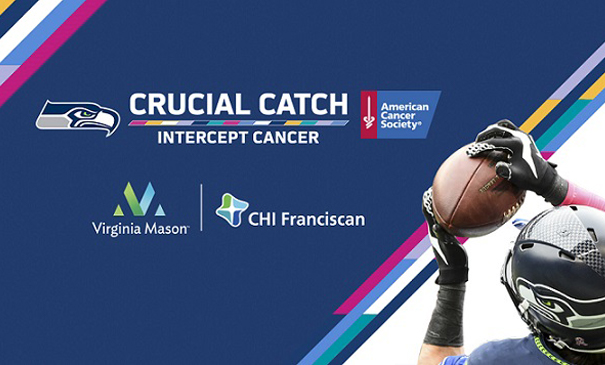 Michael and Deborah H. looked around CenturyLink Field at the Crucial Catch game between the Seattle Seahawks and Los Angeles Rams Oct. 7, 2018, and blinked their eyes in disbelief, overwhelmed at nearly 70,000 fans cheering as they walked onto the field at halftime to be honored.

The couple — both cancer survivors — were part of a group from Virginia Mason, CHI Franciscan Health and the American Cancer Society to represent all survivors who’ve battled cancer and won. Each survivor carried an “I Celebrate” card with the names of those who lost their battle with cancer, are struggling, or have defeated it.

“We were moved to tears, reflecting on our own journey, and hearing the courageous stories of other participants,” said Michael. “All these people know they are lucky — that they had a crucial catch with cancer and are here to tell about it. Many of these people feel they have a responsibility to raise awareness, just as Deborah and I feel.”

“Feeling the crowd offering encouragement on the field and being with other survivors is a memory I will cherish forever,” Deborah added.

Twelve percent of proceeds from instore purchases of Crucial Catch merchandise during the month of October were donated to “Crucial Cash.” In partnership with Virginia Mason and CHI Franciscan, this “Crucial Cash” fund helped provide support services for local patients in cancer treatment. Additionally, all Pro Shop locations were accepting donations.

Val, a colon cancer survivor from Puyallup, said she is still coming to terms with her cancer, so the walk onto the CenturyLink Field turf was very powerful for her. It was a reaffirmation, and a boost to her determination.

“You sometimes feel you are in this journey alone, and then you see all these people honoring you — it’s incredibly powerful and moving,” Val said. “It’s hard to talk about, but it was a memory I will never forget.”