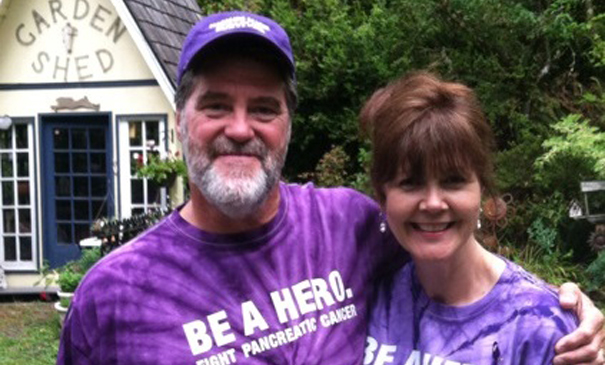 In 2004, at an appointment to scan his kidney stone, doctors found a large tumor in Terry Rudnick’s pancreas. After surgery to remove two-thirds of his pancreas and a pathology report, a cancer specialist wasn’t optimistic. Terry and his wife Roberta asked for a referral to Virginia Mason and saw Vincent Picozzi Jr, MD.

“Dr. Picozzi had great news,” says Terry. “Unlike most pancreatic tumors, mine was slow to grow and spread. We watched it for five years, but in 2009, six tumors turned up.” Then Terry underwent a treatment protocol developed by Dr. Picozzi. “Two years later my tumors had shrunk to about half their original size and they’ve stayed that size to this day,” he explains. “I continue treatment and live my normal lifestyle. Dr. Picozzi and the Virginia Mason oncology gang have given me years that I would not have otherwise had. To say that I’m thankful and grateful would be an understatement.”

To give back and help doctors and researchers move closer toward a cure, the Rudnicks created the Fisherman’s Breakfast Fundraiser. “We want to give pancreatic cancer patients hope for longer, healthier lives,” they emphasize. In 2012, they hosted a fisherman’s breakfast during a salmon derby on the beach in front of their house on Dana Passage in South Sound. All proceeds were donated to the Virginia Mason Pancreatic Cancer Research Foundation.

While the derby no longer exits, the breakfast was an enormous success and continues to grow as a community event. On a Saturday during August, when Chinook salmon fishing peaks, Roberta’s weeks of planning, promotion and fundraising comes to fruition as she personally cooks about 150 breakfasts. About a dozen volunteers serve the meals, even with lattes. They’re served to fishermen in boats (who order from their cell phones) and walk-ins who eat on the Rudnick’s deck or the beach. With food sales, raffles and support from friends, relatives, colleagues and businesses, donations for the last six years have reached $53,000! Terry, an expert sports fisherman/guidebook author, and Roberta, a realtor, and their sons, Evan and Adam, thank everyone who have given generously over the years.  Terry thanks Roberta who is the “heart and soul of the fundraiser” and has been his “support system and guardian angel.”

Breakfast highlights include two nurses from the cancer center coming to help with the first breakfast and staying to fish and Dr. Picozzi attending the last three breakfasts. “We’re extremely grateful they join us,” says Terry. “We’re all in this together and it strengthens that feeling of family as we fight pancreatic cancer.”