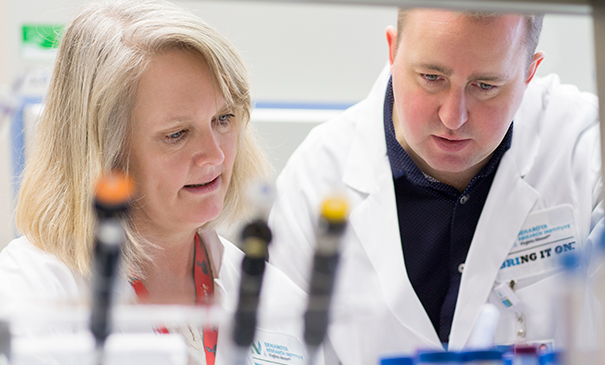 Scientists at Benaroya Research Institute at Virginia Mason (BRI) recently made a groundbreaking discovery that will alter the course of allergy research. Erik Wambre, PhD, and his team, identified a single type of cell that appears to drive all allergies. Donor contributions made it possible for the recruitment and support of Dr. Wambre, as he transitioned from a young scientist to a principal investigator. This allowed him to turn his early idea into a team effort focused on researching cells that cause allergic reactions. Philanthropic support of this foundational work led to a grant from the National Institutes of Health (NIH), so he could pursue this research through to major discovery.

“For the first time, BRI researchers have identified and are able to target a unique type of cell that causes allergies. Up until now, we couldn’t easily identify the ‘bad guy’ cells triggering allergies from the ‘good guy’ cells protecting the body,” says Steven Ziegler, PhD, who leads BRI’s Immunology Research Program. “This makes allergy research much more straightforward and opens the door to therapies that could target this common enemy and transform treatment.”

Allergies affect 25 percent of the population or 50 million people in the U.S. Allergies occur when the body’s immune system makes a mistake and overreacts to a foreign substance (an allergen), such as pollen or animal dander, that in most people is generally harmless. Allergies can range from mild to severe. For some people, they can compromise quality of life and even be life-threatening.

“This discovery provides hope to millions of people suffering from allergies worldwide,” says BRI President Jane Buckner, MD. “Support from our donors encourages our researchers to be truly innovative and fearless, even when it means going against common scientific understanding such as Dr. Wambre’s allergy discovery. Donations also allow us to attract and retain scientists that are the best and the brightest.”

Dr. Wambre, one of BRI’s youngest principal investigators, spent seven years making allergy discoveries that led to the single cell breakthrough. His work with his colleagues continues to make advances and progress.