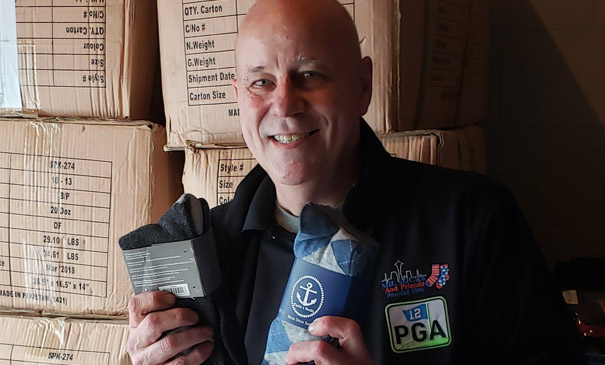 Gifts for the Sole: Sock Donations Make a Big Impact at BBH

When Mike Taylor volunteered at the Boeing Classic golf tournament for nearly a decade, he wore khakis and a golf shirt like everyone else, but with one remarkable difference — the wildly colorful and crazily patterned socks that earned Mike the nickname “Mr. Socks.”

Not only is Mike known for wearing colorful socks, he’s also known for donating them to organizations like Bailey-Boushay House (BBH). BBH gives clients new socks daily to help prevent the spread of infections from open wounds, a common hazard among the homeless population because their feet are often exposed, and many walk a lot.

Without clean socks, people can develop painful corns and calluses from pressure and friction on their feet. Another risk is sepsis (blood infection) that can start from a simple blister.

“Socks are the number one item organizations need — even more than toilet paper,” Mike says. “And not only are they necessary, they’re fun to receive! That’s testimony from my own family because I give them socks every year for Christmas.”

Last year, his goal was to donate 50,000 pairs of socks, but he more than doubled it, giving 105,552 pairs to charities all over King County. More than 5,000 of those pairs went to BBH because he'd heard about their need through his late daughter, Stephanie Taylor, who was actively involved in local philanthropy.

Giving to those in need is a deep-rooted tradition in Mike's family. He remembers going door-to-door, collecting blankets for victims of an earthquake in Fairbanks, Alaska, when he was just 10-years-old — one of the many ways his family made an effort to give back. In recent years, Mike and his mom wanted to do something special around Christmas, so they each put in $250 to buy socks to donate to local organizations at Fred Meyer's Black Friday sale. Then, after his mom passed away in 2009, he continued donating socks in her honor.

Mike tries to donate as many “bright and funky” pairs of socks as “regular” plain white socks. Last year, his donation to BBH saved the organization more than $7,650. Now they can put that money toward providing things like meals and medication for their clients.

Right now, Mike buys and delivers all the socks himself. He's in the process of becoming incorporated as a charity called “Mr. Socks and Friends” so he can recruit volunteers and get additional funding.

“People need socks, so they're always grateful to receive the utilitarian ones,” he says. “But when they see the really wild ones it does something different — people often cry. It's like realizing that someone sees them as a whole person with a sense of humor and a capacity to enjoy little things like getting dressed.”