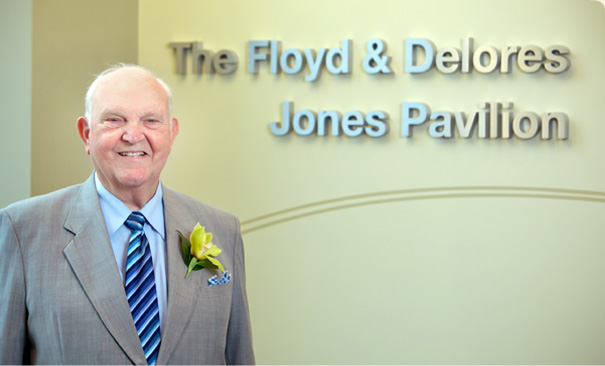 Floyd Jones, the 11th of 12 children, was born into an Arkansas sharecropper family in 1927. Four years later, the family moved to Missouri, where they raised cotton, melons and corn. The children’s education came second. “You had to work until the crop was harvested in the fall,” Floyd says. “I don’t remember starting school until after Thanksgiving.”

Floyd, who enjoyed learning, envisioned a better life for himself. “I somehow knew that getting through school was the thing to do. And my mother was very encouraging to me.”

After graduating high school in 1946, he joined the Army with an eye toward the GI Bill. After finishing two years at Humboldt State University in California, the Korean War broke out and Floyd reported to Fort Lewis. Shortly before his release, he attended a friend’s engagement party, where a woman named Delores Haglund caught his eye. Floyd asked her to dance. “When I put my arm around her, it was just heaven. She had amazing poise and confidence.”

The couple married in 1953, and a year later, Floyd graduated from the University of Washington with a degree in Foreign Trade/Finance and started a job at Dean Witter and Company. “The best training I ever had to be a stockbroker was picking cotton by the pound. It taught me work ethic and ambition.”

Delores, also a University of Washington graduate, worked for the King County welfare department. “She had a big heart,” Floyd says. After the birth of their children, Laura and Steven, Delores turned her attention to community activism. “Politics were really important to her.”

As Floyd’s success as a stockbroker grew, so did the couple’s support of their community. “My thought was, if I was lucky enough to do well, then I should share it with others. Delores felt the same way.”

The couple worked to instill those same values in their children. “They understood the term ‘what goes around, comes around.’ And Delores was a highly ethical and honest person. Our children certainly benefitted from that.”

The Joneses were one of the first supporters of KCTS 9. They also gladly shared their good fortune with the University of Washington, the American Civil Liberties Union, the Union Gospel Mission and the Seattle Milk Fund — all of which Floyd continues to support today. The couple began contributing to Virginia Mason after Delores underwent a double mastectomy for breast cancer. “She never considered it a problem,” Floyd says. “She was a strong woman.”

In 1986 they formed the Floyd and Delores Jones Foundation. “We wanted to be a little more professional and organized about our giving,” he explains.

When they heard about Virginia Mason’s plans for a new cancer center on the second floor of Virginia Mason’s Buck Pavilion, the couple stepped forward with a generous gift. In 2004 the Floyd & Delores Jones Cancer Institute welcomed its first patients. “I’m really proud of this place. It’s helped so many people,” Floyd says.

Sadly, in June 2005, Delores passed away. The following year, as a tribute to her memory, Floyd funded the renovation of the Playhouse at the University of Washington. (Previously the couple had endowed a chair in the arts at the university.) “She loved the theater.”

Floyd’s next major endeavor was to support Virginia Mason’s Transforming Healthcare Campaign. The Virginia Mason Production System “makes a lot of sense to me,” he says. “I believe that Virginia Mason is creating a model for health care in this country, and I want to see that happen.” He led the campaign with a substantial contribution and boundless energy — including input from the patient perspective to the design of the patient rooms. In 2011, the Floyd & Delores Jones Pavilion opened its doors. “Delores would have been amazed. I’m really proud of my investment.”

What impresses him the most about Virginia Mason? “The morale of the people is really good — not just among the physicians, but also the staff. There’s a real team spirit there. And winning the Leapfrog Award is just extraordinary. I’m so enthused about that.”

Floyd continues to work as a stock-broker for First Washington Corporation and sits on the board of the Nordic Heritage Museum in memory of Delores. “She was Scandinavian. I’m more of an honorary Swede,” Floyd remarks. He also makes time for his two granddaughters, his poetry and his second home on Camano Island.

Another of his favorite activities is spending time with his special friend, Alené Moris, who co-founded the University of Washington Women’s Center. “She believes in what I’m doing, and I believe in what she’s doing,” he says. The other important person in his life is Elsé Jastad. “She came to help me after my hip replacement surgery at Virginia Mason, and she’s been here ever since. She’s family.”

Above all, Floyd is grateful for his good health. “It’s allowed me to work hard, and to support the organizations and projects that are important to me. This is a blessing that many people don’t have,” he says.