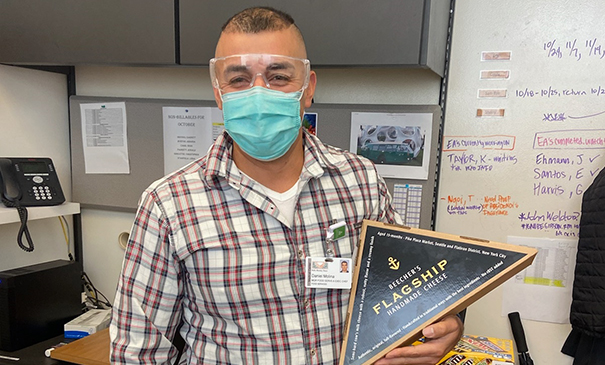 Redefining the Art of Giving - Everyone is Worthy of Fun

Chef Daniel Molina decided pretty quickly that he would make macaroni and cheese with the eight-pound block of Beecher’s Flagship Cheddar delivered to his kitchen.

The mac and cheese would serve those who come to Bailey-Boushay House (BBH) for the hot meal program each day.

“Good homemade macaroni and cheese is hard to find. But I knew chef Daniel would knock it out of the park,” says Debbie Killinger, longtime BBH donor.

Debbie had purchased the cheese in the silent auction at BBH’s annual Swirl event. Instead of throwing a dinner party or sharing the cheese with her neighbors, she decided people who count on BBH’s hot meal program would enjoy it most.

For Debbie, giving to BBH is as much about bringing people happiness and making them feel worthy as it is about providing the services they need.

“Meals are where community and family are strengthened,” Debbie says. “I believe food should feed the body and feed the soul.”

And chef Daniel’s mac and cheese achieved both.

“The goal of our hot meal program is two-fold: making healthy meals that people want to eat, and fostering a space for people to build connections,” says Brian Knowles, executive director of BBH. “Gifts like Debbie’s go far beyond their dollar value. People are still talking about that mac and cheese!”

When it arrived, Brian sent Debbie a photo of chef Daniel holding the eight-pound hunk of cheddar with pride.

“Most people don’t understand food insecurity. For a long time, I was one of those people, which is why it’s easy to take for granted things like being able to order made-from-scratch mac and cheese when you’re out to dinner,” Debbie says. “It’s a good reality check to reflect on how the amenities that are relatively easy for most of us can mean so much to others.”

Over the years, Debbie has donated tickets for BBH residents to attend the Seattle Men’s Chorus show. She’s paid for a couple of buses full of BBH residents to the Puyallup Fair.
“I’ve been giving to BBH for over 20 years. I donated the cheese because I’ve seen the care they take in making meals for their residents and day members,” Debbie says. “It’s the same quality of care that they give through social services and medical care.”

Looking forward, Debbie says she’s always got her creative thinking cap on — ready for the next opportunity to fund something that will inspire fun and priceless memories.