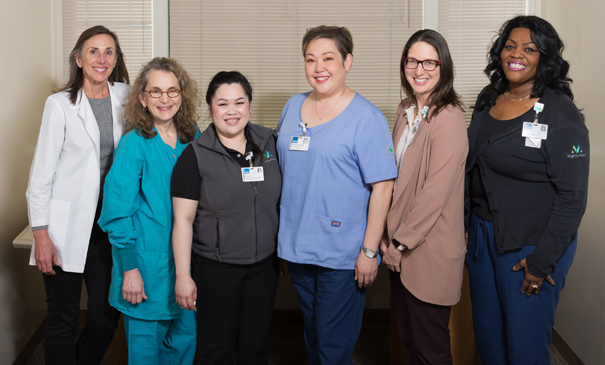 When Katy was in Europe, singing abroad with her church choir in 2009, she noticed a small spot on her breast. When she returned home, she saw her local doctor at Virginia Mason. He said it was a papilloma – a small growth that’s usually harmless, but can be a sign of cancer. There were no signs of cancer on her mammogram or ultrasound. But to be certain, they did an MRI — and found very early-stage cancer.

“I had ‘stage zero’ breast cancer,” Katy says. “There were tiny cancer cells inside the ducts. I needed a mastectomy to keep them from spreading.”

She had surgery soon after. And when the team was doing a final check, they found a suspicious node. It could have been abnormal tissue caused by multiple biopsies — but the head pathologist felt something wasn’t right. He sent her sample all the way to the east coast for a specialized test, to find out what it was.

“We waited over Christmas, which felt like forever,” Katy says, “and learned it was much more serious: Stage four of amino immunoblastic T cell lymphoma, a very rare cancer most often found in older men.”

“Virginia Mason’s team approach to medicine makes a world of difference,” Katy says. “Each member of the team is specialized and highly educated, but they don’t hold it close to their chest — they put their heads together and consult each other to make the best care plan for each patient.”

Thanks to this expert care, Katy recently celebrated eight years in remission. She showed her gratitude by pledging a recurring gift to honor her doctors and supporting research and care at Virginia Mason.

“After six years of no signs of cancer, Dr. Robinson fired me as a cancer patient,” Katy says with a laugh. “And without Virginia Mason going above and beyond, I wouldn’t be here. I hope my donations help Virginia Mason continue to provide the best care.”